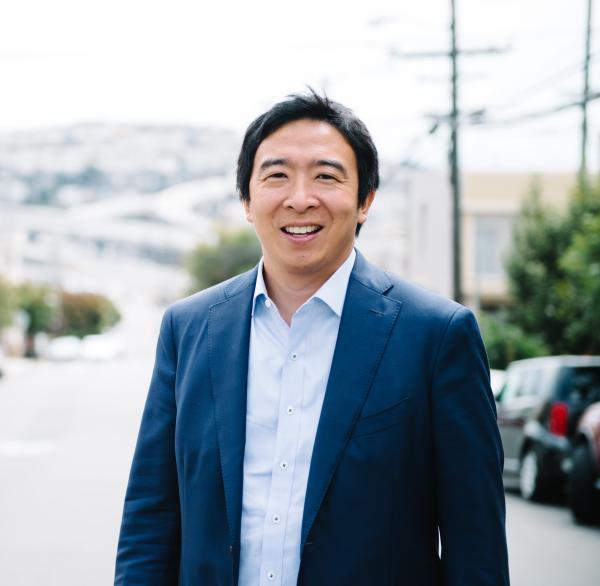 Our democracy is broken, and Andrew has one of the most ambitious plans to rewrite the rules of our country so that it works for us. Andrew plans to address campaign finance through a public financing plan - Democracy Dollars - where every eligible voter will receive $100 per election to donate to any federal or local candidate. This will drown out the current dark money that plagues campaign finance. Andrew will also restore voting rights to most current and previously incarcerated individuals, end partisan gerrymandering, implement automatic voter registration, and make election day a federal holiday. He will also push to update and restore the Voting Rights Act.

Andrew’s flagship proposal, the Freedom Dividend of $1,000 a month for all citizens over the age of 18, addresses serious issues seen by both Democrats and Republicans. As more jobs are lost to automation, we must propose powerful solutions to rewrite the rules of the 21st century economy to put humanity first. By creating a basic income as a right of citizenship, it eliminates stigma, reminding each of us that we’re owners and stakeholders in the country. In conservative Alaska, the oil dividend has bipartisan support, in part because of its universality. The Freedom Dividend addresses serious issues like economic inequality and poverty, while also reducing reliance on welfare and bureaucracy by producing economic freedom.

As the son of immigrants, Andrew is proof of the positive power of immigration. Almost half of Fortune 500 companies were started by immigrants or children of immigrants. Immigrants make our economy stronger and more dynamic, but they are being scapegoated by the current administration. If you go to a factory in Michigan, it’s not wall-to-wall immigrants; it’s wall-to-wall robots and industrial machines. Andrew is committed to supporting DACA, the DREAM Act, expanding TPS, eliminating private prisons and detention centers, and ending the use of law enforcement as ICE Detainers. He will fully fund the immigration and asylum court system ensuring speedy hearings, provide counsel to anyone seeking asylum, and keep families together.

Andrew recognizes that gun ownership is a serious responsibility. He supports better gun safety measures. The Yang administration would enact universal background checks and promote a stringent licensing system. He would work to ban assault weapons. Andrew also supports a federal buyback program for individuals who want to give up their firearms. He would also work to repeal shield laws to ensure that the gun manufacturers have an economic motivation to ensure their weapons don’t end up in the wrong hands. Finally, he’d invest in technology that would ensure only authorized users could fire a weapon.

Climate change is an existential threat, and we need to leave all options on the table. Andrew’s plan will immediately cut all subsidies for fossil fuel companies and new leases on public lands. He will invest in the development of new, safer nuclear reactors to generate immense amounts of carbon-free power. Andrew will invest heavily in renewable energy and carbon capture technologies to slow and reverse the damage already done to our climate. He will direct the EPA to enforce the CAA and set a net-zero target for new buildings and cars. And he will provide resources to communities that need to relocated due to the impact of climate change, which too often falls on communities that are already struggling economically.